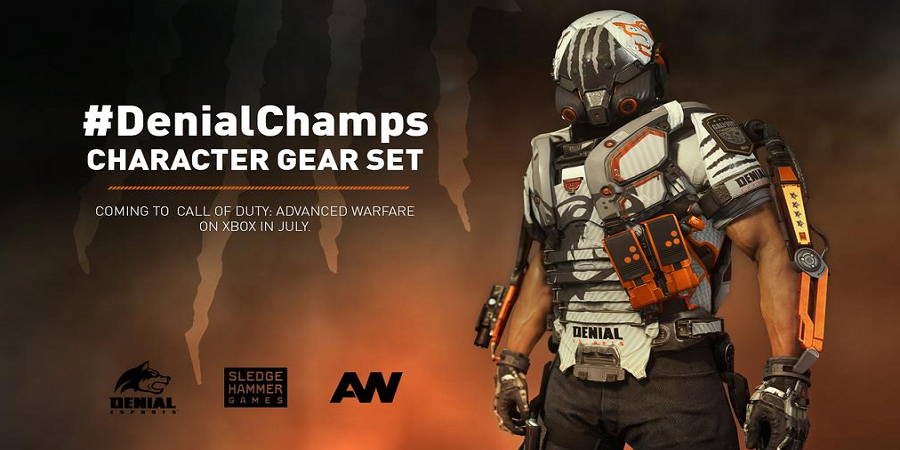 The players and management with Denial eSports have been hinting at a big announcement for a few weeks now. They told us that it would come out on June 4th, and it just so happened that Major League Gaming was also hinting at a big announcement on June 4th. It didn’t take a genius to figure out the two announcements were related. Most people knew exactly what it was from the start, mainly because there was one big clue: Denial won the Call of Duty Championship. Of course the announcement had something to do with that!

Were you right about the announcement? Many people were. In-game items related to professional Call of Duty teams are entirely new to the game, but Sledehammer had incorporated CoD Champs gear as purchasable items before the tournament. Many other eSports, such as League of Legends and CS:GO, advertise the competitive scene via their in-game clients, so it is very refreshing for competitive Call of Duty fans to finally see something similar.

What might be next? It would be amazing to see advertisements for the MLG Pro League and all major tournaments when logging onto Call of Duty, but this step may be a long shot. Someday…

Major League Gaming likely had a large influence on Sledgehammer’s decision to incorporate Denial geat into Advanced Warfare. Unfortunately for them, Denial’s second announcement of the day will not please MLG quite as much.

That’s right, Denial eSports will now be streaming on Twitch, the largest streaming platform in the world and the biggest competitor for MLG.tv, who have tried to lock down the competitive Call of Duty scene by signing contracts with all of the large organizations and players to exclusively stream on MLG. Many people are quick to point out that when Evil Geniuses were around on Ghosts, they too were sponsored by Twitch instead of MLG.

Luckily for MLG, the pro Call of Duty players on Denial are still going to stream on their MLG.tv channels for the time being. MLG generally prohibits anyone from streaming their online tournaments on Twitch, simply due to competition. Specifically, Denial states that Twitch will allow the CoD guys to stream on MLG for as long as necessary. Sounds like they will forever be on MLG, because the MLG Pro League and other tournaments are the main events the players broadcast!

What do you think about these announcements? Let us know in the comments below!