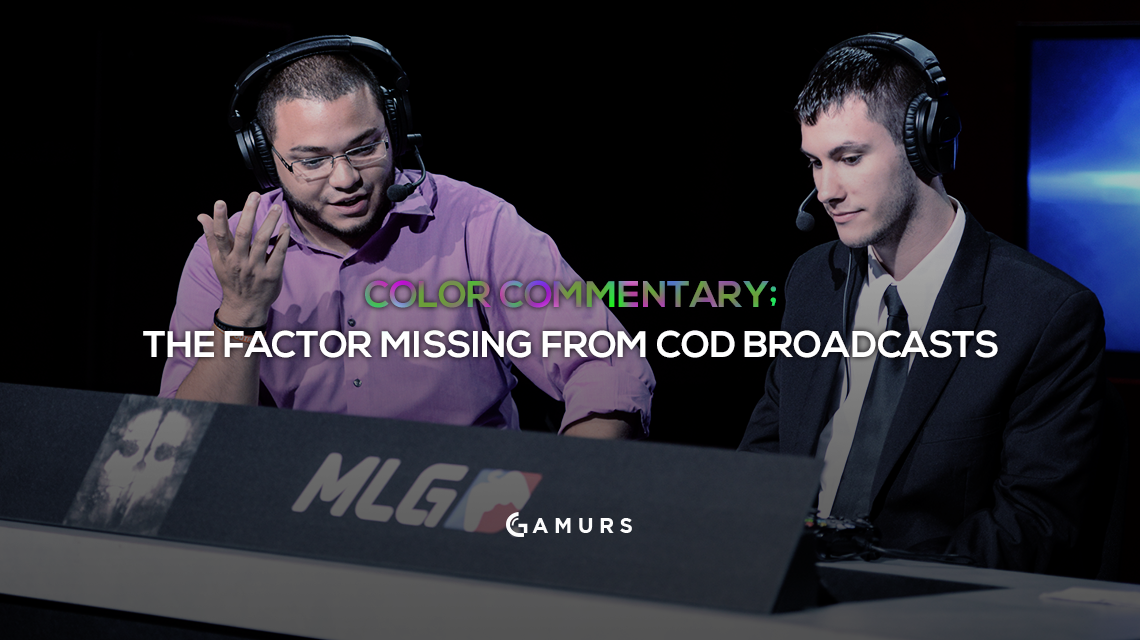 If you have ever watched American football on television, you are probably familiar with the voices of Joe Buck and Troy Aikman. In some cases, you may be so familiar, that hearing them apart seems weird to you. For over 15 years, these two have been calling football games together for Fox Sports, a record that is currently unbeaten.

If you know a little about broadcasting, you know that in most cases, a broadcast is setup with two announcers; one play-by-play man, someone who calls the plays and describes what’s happening as it happens in real time, and another color commentator. The job of the color commentator, sometimes referred to as the analyst, is to go back and look at the play or recent event that has happened and break it down. They often do this in between gaps in action to avoid quiet periods of time in the broadcast.

In my opinion, Call of Duty broadcasts are strong in the play-by-play department, but fall short in the color commentary area. Here are some of my reasons why I think that is, and where they could possibly improve.

First of all, I would like to say that the current setup used by a majority of Call of Duty broadcasts is there for a reason. CoD games move at an usually fast pace, which offers little time for analysis, unlike American football, which usually provides 20-25 seconds in between plays for discussion. However, I still believe there is room for improvement within the broadcasts of Call of Duty tournaments and other events.

Most events in Call of Duty will traditionally utilize two play-by-play commentators for the actual game, and then in between games toss the show over to a team of analysts, who sit on a desk separate from the play-by-play team. This is not an uncommon way of doing things and is used throughout most major sports, but I still feel things can be done better.

In games like Search and Destroy, where the pace of play is usually slowest, there are often times where no one is talking on the broadcasting, simply because both broadcasters are play-by-play, and when both teams are feeling the map out at the beginning of a round, there is not much to say. This is the time when a color commentator is best; he or she could be there to talk through what the teams are doing, how they are doing, and why they are doing it that way.

Some of the broadcasts that I have watched of Call of Duty (and I have watched a lot covering the game for almost three years before branching elsewhere), have been made best by Matt “MrX” Morello. MrX was the coach of compLexity and Evil Geniuses during their dominating run in Black Ops II and Ghosts. He is a man who knows his way around a Call of Duty map, perhaps better than anyone else in my mind. When you took his analyst perspective and matched it with a fun and energetic play-by-play commentator to balance the often information filled sentences, MrX would share it to make for a fantastic show.

Far too often, a Call of Duty broadcast is two play-by-play commentators who sort of end up in a shouting contest against one another.

Search and Destroy matches would be the easiest to improve; a simple replay in between the rounds, with some analysis walking the viewers through what had just happened, and perhaps more importantly why it happened. Improvements could be made elsewhere in other games, though it would be understandably more difficult. Uplink and Capture the Flag both offer halftimes, though this time is usually spent looking at an in-game screen that is showing the score, when this time could be used cutting back to a recent or big play in the first half of the game.

League of Legends and Riot Games do a very good job of striking a nice balance between their play-by-play casters and their color commentary casters. Though League of Legends moves a lot differently than Call of Duty, often seeing short bursts of high intensity situations with gaps of not much to show in between, which is great for the broadcast who now have about a minute or so of death timers to find something to talk about. One minute is a ton of time in the broadcasting world, so Riot is quick to capitalize on these moments with solid analysis from the shoutcasting desk without having to toss it over to the actual analyst desk.

I’ll go back to what I said initially; Call of Duty broadcasts are the way they are for a reason, and that way is not necessarily bad, but it is my opinion that I think they could be improved through the addition of more play-by-play and color commentator duos.

What is your opinion on the color commentary in Call of Duty and other esports? Let us know by commenting below or tweeting us @GAMURScom.