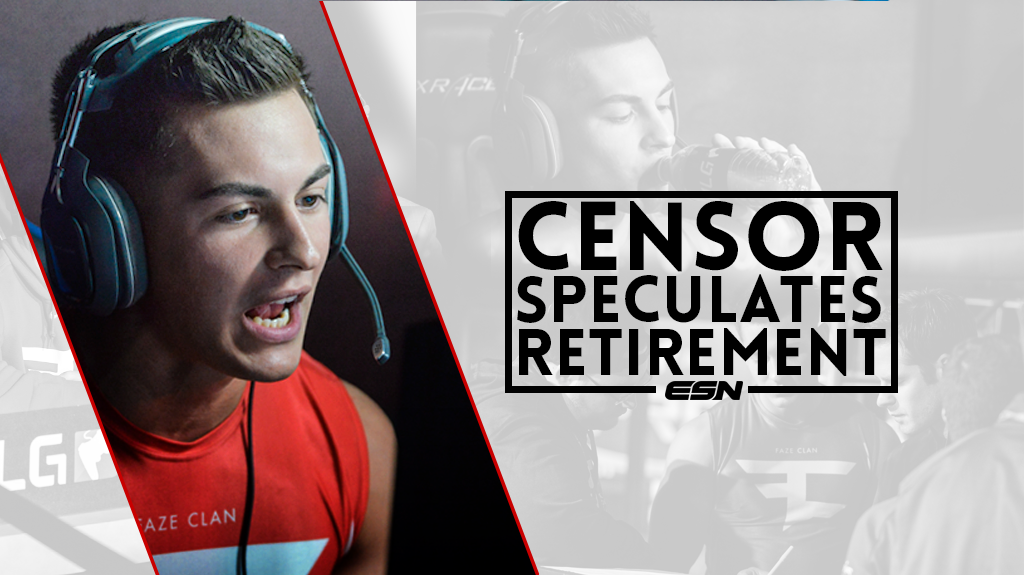 Through every game cycle, there are players who find themselves faced with the question of retiring from competitive Call of Duty. Currently, the Director of FaZe Clan and player for Enigma6 Gold , Doug “ Censor ” Martin, is faced with that question.

Call of Duty ® : Black Ops III was seen as a new beginning for Censor, as he did not compete much during Call of Duty ® : Advanced Warfare . After winning MLG Columbus by defeating OpTic Gaming in two best-of-five series, Censor seemed poised for greatness on FaZe Clan, comprised of Censor, Patrick “ ACHES ” Price, Bryan “ Apathy ” Zhelyazkov and Austin “ SlasheR ” Liddicoat.

Then came UMG Orlando; FaZe placed top-16 and found that the team chemistry remained stagnant since MLG Columbus and fell hard while OpTic Gaming, Stunner Gaming and Denial eSports were only getting better. Censor then stepped down from team captain, which led to ACHES trading away Censor and Apathy to Team JusTus for Enable and Parasite (from Prophecy ).

Censor saw himself at a tough point in his competitive career, going from a strong fourth place showing at CoD Champs last year with Strictly Business , to bring dropped from FaZe Red, then placing top-16 at the next CoD Champs with FaZe Black. After much thought, Censor decided to sit out the rest of Advanced Warfare, focusing more on his professional image and personal life.

Often receiving criticism as a poor player, Censor remains positive, telling his fans and followers to “follow your dreams.” There are flaws in the criticism that Censor receives, though. In Advanced Warfare, Censor played well during MLG Columbus, putting up nearly positive Kill to Death (K/D) ratios in all game-types. Many fans scoff at not putting up positive K/D ratios, but as an objective player, Censor is not focused on putting up high K/D’s, rather he is aiming to secure a win.

At the MLG Season 1 Playoffs, Censor did see his stats drop, but still shining in his objective role ways, he did have the highest Bomb Plant Percentage of the tournament at 38%. At the 2015 Call of Duty Championships, Censor saw his Capture the Flag K/D drop to .77, but his Uplink and Hardpoint K/D’s were consistent with many of the other top objective players, and his Search and Destroy K/D at 1.11 was among the upper echelon of all players at the tournament. For a top-16 placing, Censor put up impressive numbers.

At the Call of Duty World League LAN Qualifiers for Black Ops III, Censor put up the seventh best Search and Destroy K/D at 1.58, even dropping 18 kills on one map. For an objective player, Censor is capable of competing at a pro level. He continues to grind through the tough times, constantly aiming to get better.

Why hasn’t he succeeded?

He hasn’t found his perfect-fit team. One of the more underrated and unknown duos is Censor and Apathy. They have teamed together through each of Censor’s wins since Black Ops 2. Saints and Dedo are also two pros that played well with Censor. While they did team together for the LAN Qualifier, they did not take the time to mesh together like they did on Strictly Business during Call of Duty ® : Ghosts . If they took the time to practice often and communicate like they did before, they would be a better competitive team.

Teams require time to grow and mesh together to be successful, even more so for those that lack the star power that OpTic Gaming and FaZe Clan have. Not every player is going to be as dominant as Scump or Clayster, but that doesn’t disqualify other players from having their time to shine.

Although he took time off during Advanced Warfare, he did not let his life go to waste. He spent much of his time working with FaZe Clan, bettering himself and he also met his current girlfriend, Yanet García . He continued making videos, doing multiple giveaways and actively interacting with his fans. During that time, Censor was not afraid to admit his desire to play Call of Duty on a professional level once again.

Overall, Censor is a very capable Call of Duty player. Although he is often on the receiving end of criticism, he is a positive person, aiming to inspire his fans and grinding Call of Duty. Considering all this, it’s no surprise he has earned big sponsorships from G FUEL , GymShark and many more. Keep an eye out for Censor, he’s going to make some noise in competitive Call of Duty again.

What do you think of Censor? Should he stay in competitive Call of Duty or focus on other things in his life? Let us know. Follow @eSportsNation for up-to-date coverage on CoD eSports.