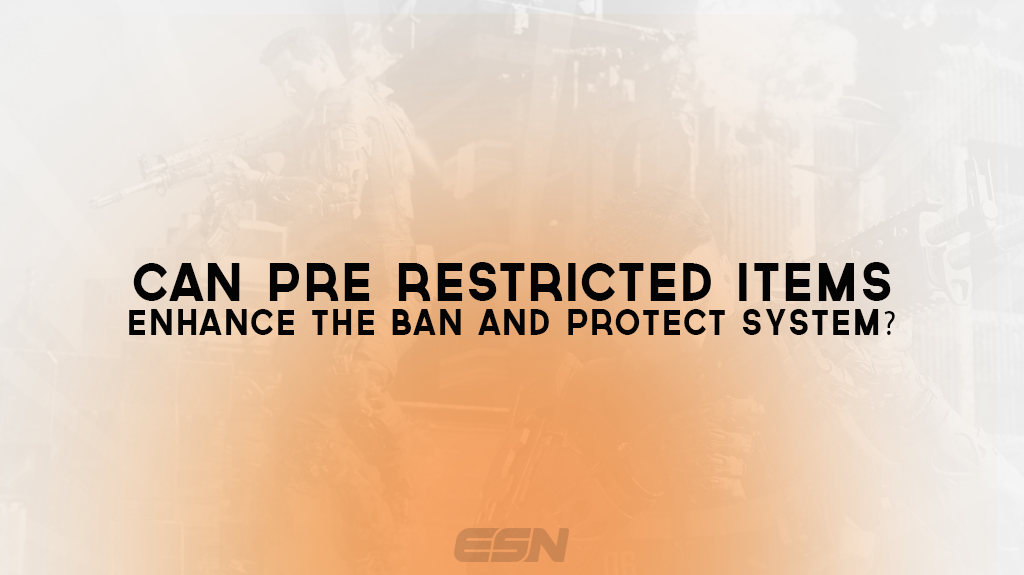 Treyarch Studios has recently unveiled their new “Ban/Protect System” and “Specialist Draft” for the highly-anticipated blockbuster title, Call of Duty®: Black Ops III . As great as this new feature appears to be, pre-restrictions still seem to be a request for the competitive ruleset.

Pre-restricted items have been around in CoD eSports since the beginning of the competitive scene back in Call of Duty® 4: Modern Warfare . CoD4 was implemented within the Major League Gaming Pro Circuit by the year of 2006. A ruleset was installed; a ruleset containing bans on certain items like the RPG, C4 explosives and so on. Every CoD after that point included bans within its competitive ruleset, until possibly now.

As seen at gamescom 2015’s eSports Briefing, the newly built system and draft allows competitors to ban/protect weapons, perks, equipment, scorestreaks and attachments, and chose individual specialist characters respectively. As aforementioned, this was the first publicly witnessed between Team Kivi and Team TeePee on the gamemode Hardpoint and map Combine , 50 seconds into the competitive match.

So far, it seems that this will be the deciding factor on what items can and cannot be utilized within an eSports match. It’s nearly perfect; the only concern is that one player from each side races at the same time to pick what should be banned/protected. Racing arguably feels sporadic, while seeded picks could be more organized. North American Epsilon eSports player Chris “Parasite” Duarte, stated a possible alternative to the situation on Twitter stating:

Any chance picks and bans can be done by seeding in turn order. In Ranked Play (Parasite meant Arena) highest combined rank gets 1st.

The game is currently in Beta, and has almost two months to change. The main question is though, will pre-restrictions within the MLG Variant Ruleset coexist with the Ban/Protect System and the Specialist Draft?

These features that Treyarch are looking to phase in to Black Ops III and possibly future Call of Duty titles are absolutely brilliant for the growth of CoD eSports. We got to even see a similar feature through the “Veto” system back in Infinity Ward’s Call of Duty®: Ghosts , during major events, which allowed two players from each team to select in turn what maps could not be played within a series.

It’s argued that items should be banned from the beginning to allow the strategical value of the system and draft to be fully utilized on competitively used weapons, perks, attachments and/or equipment. Certain items within the CoD franchise have been removed from competitions and tournaments in order to balance the game and make it fair; this removal has been the case since the early days of competitive CoD. Items such as rocket and grenade launchers, C4, duel wield, FAL OSW, scorestreaks, etc. are examples of what have been deemed “overpowered” or not unimportant in CoD eSports.

Scorestreaks such as “UAV” and “Care Package” were removed from Call of Duty®: Black Ops II in the MLG Variant Ruleset – Item Restrictions, forcing the player to either chose the “RC-XD” or “Hellstorm Missile” as their first streak. The commonly seen lineup for respawns was the Hellstorm Missile, “Lightning Strike” and “War Machine” (this is after the “Sentry Gun” was banned), with only the RC-XD replacing the War Machine within the gamemode of Search and Destroy.

Retired professional Call of Duty player Eric “ Muddawg ” Sanders pointed out on Twitter that if everything in terms of restrictions were to be done on the Ban/Protect System and Specialist Draft, how would the issue of Care Packages be solved for Black Ops III? Care Packages can still give a player a banned scorestreak such as UAV, as it did in Black Ops II.

TCM Gaming player Patrick “ ACHES ” Price, a vocal professional competitor within the CoD eSports community, has stated his opinion on the situation. He sides with the argument that ruleset pre-restrictions should coexist with the Ban/Protect System and the Specialist Draft.

He believes that this will create a more strategical layout, allowing for the random, non-used items that don’t fit in competitive play to be restricted right off the bat.

No, I want Treyarch’s upcoming system

Vonderhaar and his team over at Treyarch created the Ban/Protect System and Specialist Draft in hopes of creating a new standard in item restrictions for Black Ops III. The plan was also to force players into becoming more versatile, and making the game exactly how they have wanted it for the first time in Call of Duty history. Vonderhaar stressed at the eSports Reveal that “there’s no doubt that this is the most significant change to how Call of Duty eSports will be played in the coming years.”

No longer would competitors have to wait for MLG and developers to make changes to the ruleset. Players can create the meta of the game on their own, through the choices they make within the brief few minutes they have before each and every game.

Vonderhaar stated at gamescom that he is trying to make CoD eSports as close to the normal, public game as possible within a competitive match in Arena or in a custom match:

Restricting game content actually takes the game and sort of pushes it further away from how the vast majority of people actually play the game, where they play with everything. So it’s on us as developers to properly balance the game for sure; it’s on all of us who are interested in eSports to promote a real healthy ecosystem where the public game and the competitive game can be as similar to one another as possible.

As previously mentioned, these features would constantly change the tone of competitive matches with different items being banned and protected for every competitive gamemode. For example: let’s say your favorite submachine gun, the Razorback , was taken from you before you could protect it, forcing you to use another SMG, the Kuda , which you protected. This creates fresh changes, especially if the opposing team beats you to your favorite items.

The game will constantly be changing, allowing pros to become even more versatile in their craft. This system will also create more skill gap; the world’s finest will separate even further from the more average players within this upcoming first-person shooter.

Do you want pre-restrictions within the ruleset, or do you believe that Treyarch’s system alone will do fine? Let us know. Stay up-to-date with more Black Ops III coverage and content over at our Twitter – @eSportsNation .