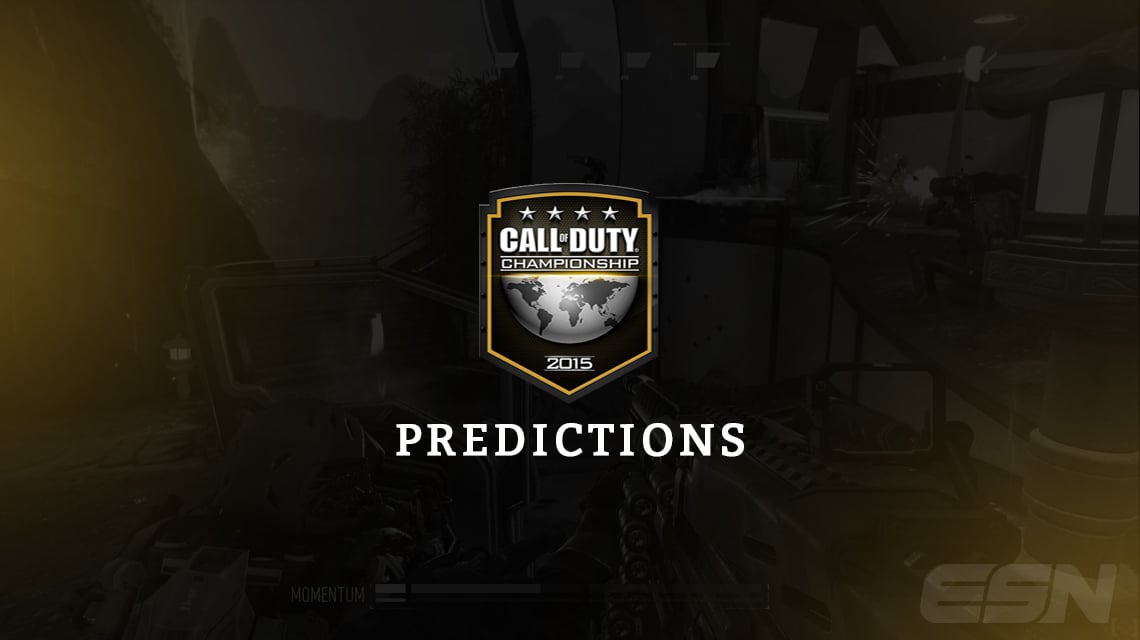 Below you will find eSportsNation’s predictions for the 2015 Call of Duty World Championship® presented by Xbox. The following predictions are based off of recent LAN event performances and placings within Call of Duty: Advanced Warfare.

*Please note: These are personal ESN staff predictions and opinions.

The top two teams from each pool will move onto the Double Elimination Championship Bracket, while the bottom two teams will be eliminated from the remainder of the tournament. More information on bracket play can be found on the Call of Duty World Championship 2015: Preview.

Coming into the event with the #1 seed, OpTic Gaming will be looking to dominate and finish first in their pool. The most competitive match ups we’ll be seeing, will go down between Team Orbit and NxG.Rapid. Team Orbit placed Top 9-12 at the NA Regional Finals, while NxG.Rapid placed Top 5-8 at the EU Regional Finals.

Denial eSports is one of North America’s best competitive teams, placing second at the NA Regional Finals. Despite playing a tough team like Prophecy, we expect Denial to take first place in their pool. It would also be safe to assume that Prophecy would come out second within this pool, but we’ll definitely be seeing a close matchup against HyperGames, a worthy contender, who placed Top 5-8 at the EU Regional Finals.

With FaZe Red having such an experienced and slaying-powered line up, it would be safe to assume that they will sweep this group. The question is, what team will make it into bracket play? An important matchup will be between Automatic Reload, who placed Top 9-12 at the NA Regional Finals, and fab.DE placed Top 5-8 at EU Regional Finals. Note that while the fabE.Allstars was the first EU team to qualify, their fabE brother-team surpassed them within the tournament.

OpTic Nation, a team full of former World Champions, proved their dominance at the NA Regional Finals, and will look to do so within this pool. The ANZ Qualifier runner ups, Exile5.T1 Dotters, will be looking to make a fantastic run, similar to last year. They’ll have to go up against Gamers 2, a formidable opponent, who placed Top 5-8 at the EU Regional Finals to make it into the Championship Bracket.

Team EnVy stands alone as the only North American team in their group. Barring a huge upset, they will easily come out at the head of their pool. One of the more favored matchups will go down between Team Menace, who placed Top 3-4 at the EU Regional Finals, and PLT.Mindfreak, who ended up winning the ANZ Regional Finals. Both teams are very talented, but one of them will go home.

FaZe Black has something to prove this event, and they’ll do so by looking to take first in their pool. TCM Gaming will definitely be a challenge for all the teams within this pool, after placing second at the EU Regional Finals, but they must defeat an underdog team, Below Zero, who placed Top 13-16 at the NA Regional Finals.

The “Group of Death” as many like to call it, will see Team KaLiBeR  finishing out, with a hard earned first place. Team KaLiBeR has given some of the world’s best teams some of the hardest competition, and will not back down here. Epsilon, who placed first at the EU Regional Finals will be looking to take the second spot, but will have to go up against Strictly Business, who placed Top 9-12 at the NA Regional Finals.

With OpTic Gaming winning the last several events dominantly by only dropping a few maps, it only seems reasonable to say that they will come out on top. Ian “Crimsix” Porter will be looking to grab his second World Championship under OpTic Gaming, a team similarly dominant to compLexity Gaming last year.

There are a lot of teams that have the potential to break into the top eight, but with the high worldwide-level of competition at this event, we had to break down the world’s best teams.

We have decided to compromise a list of teams that could possibly break into top eight, knowing there are so many talented teams at this event.

Did you agree with our overall Pool Play and Top 8 predictions? Let us know in the comments below. Be sure to stay up-to-date on all of the 2015 Call of Duty World Championship® content and coverage at our Twitter – @eSportsNation.