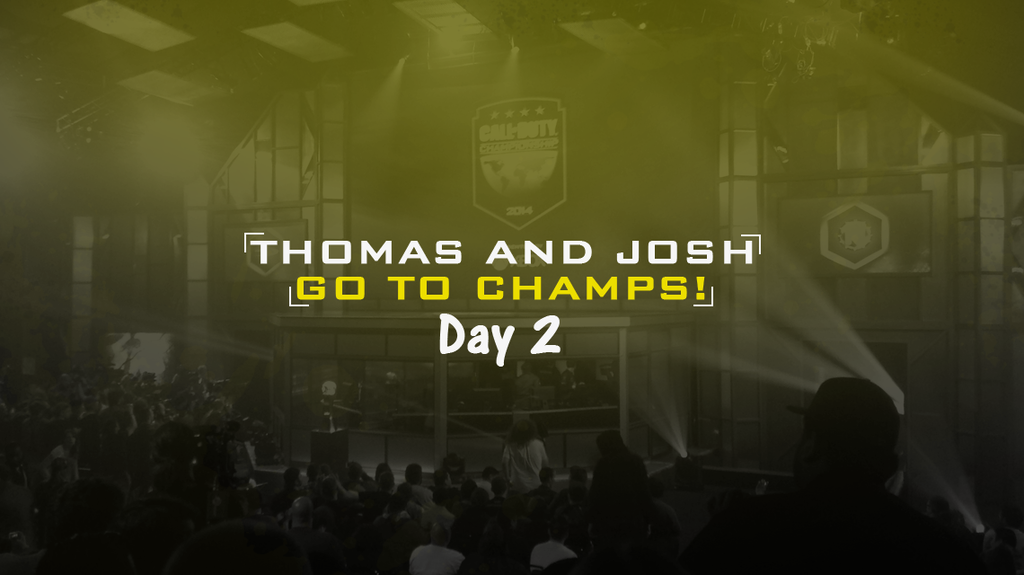 This blog post will tell the chronological story of Day 2 at CoD Champs for ESN’s Community Manager, Josh Reilly and Editor-in-Chief, Thomas Reese. It will alternate paragraphs by author to tell the full story and share two different perspectives.

Josh – The second day at the 2015 Call of Duty World Championship started off similar to yesterday. Only difference is, this morning the ESN team and I walked to the event and stopped for breakfast at Coffee Bean, conveniently located on the way to LA LIVE. We walked with Hitch from OpTic Intel, one of our main competitors.

Thomas – The media room was exactly how we left it, freezing. After the sun went down last night, the temperature inside dropped significantly. Unfortunately for us, the air conditioner vents blast freezing air directly into the media room, where they happen to be placed. I didn’t pack any warm clothing for the trip, so I resorted to jumping-jacks to keep the blood moving. The temperature went back up as the sun came up in the morning.

Josh – We set up our laptops and began working until it was time…Time for what you may ask? Well probably the best series that will be seen at this year’s CoD Champs — Denial eSports vs. OpTic Gaming. The series opened in favor of Denial for the first time this year, as the team was able to outslay the strongest team in the game. The room was filled with passionate fans supporting both teams. For the first time ever I felt as if the fan vote was split equally in the crowd. Teams cheered for two piece after two piece as Attach and Crimsix were going huge for their respective teams.

Thomas – I watched the OpTic vs. Denial game in a sea of spectators. There was probably over a thousand people watching in the venue. Denial played incredibly well as Clayster provided the leadership and hype factor that his team needed. They shocked the world and won the series 3-1. It was one of the best series of Call of Duty I have ever seen.

Josh – The upsets continued at CoD Champs with OpTic Nation and Team EnVy being sent to the loser’s bracket and having to face each other in the first round of LB. Orbit was able to close out their series against FaZe Black, sending Censor, Apathy, ProoFy, and Studyy home without even winning one match in bracket play.

Thomas – Not to take away from the crazy upsets that were happening, but some awesome matchups were being played all day. Team Revenge defeated PLT_Mindfreak and FaZe Red to secure top six at the tournament. They were playing incredibly and were shocking a lot of people. They actually went on to secure a spot in the Winner’s Finals and secured a T3 placement.

Josh – OpTic Nation and Team EnVy proved to be a clash of the titans with long-time veterans playing on both squads. The loser would go home with a T16 placement, which nobody wanted. OpTic quickly took a 2-0 series lead, but EnVy’s experience in game led them to the comeback tying the series 2-2. Search and Destroy Biolab opened up, and after five rounds, players on OpTic Nation had some audio issues and you almost felt the momentum slipping away immediately after the break. Once the game started back up, EnVy was able to dominate and win the map and series.

Thomas – While all these matches were happening, I was busy writing an article on YouTuber’s perspective of the event. It took a few hours, but I was happy with the final product. I also spent time networking with other members of the media, and explaining the basics of CoD eSports to some of the people that didn’t know what was going on.

Josh – I thought things were calming down for the night and everything would go as normal but then, tragedy (to some viewers) struck when FaZe Red faced off against powerhouse, OpTic Gaming in the Loser’s Bracket. OpTic Gaming was leading Hardpoint until the last two hills when FaZe clutched up and ended up winning the map. From there, it was a landslide victory. FaZe Red were able to take down the fan favorites to win CoD Champs, OpTic Gaming. As expected, Aches was like a kid on Christmas morning after knocking OpTic Gaming out of CoD Champs.

Thomas – While FaZe Red was destroying OpTic on the mainstage, I was over at the side stations watching PLT.MF eliminate Team Kaliber for T6 and Denial eSports secure a spot in the winner’s finals after beating Automatic Reload. The FaZe and OpTic match was being broadcast on the big screen so we could watch it over at the side stations too. I stood by Attach and Clayster’s mothers as they cheered FaZe on throughout the match. It was awesome to see parents get into the game that much.

As soon as OpTic lost to FaZe, half of the people in attendance left the venue. The remaining loser bracket matches were played and the stage was set for Championship Sunday. We can honestly say that today was one of the most exciting days at a CoD event ever. While it didn’t go the way people expected, great games were played all around.