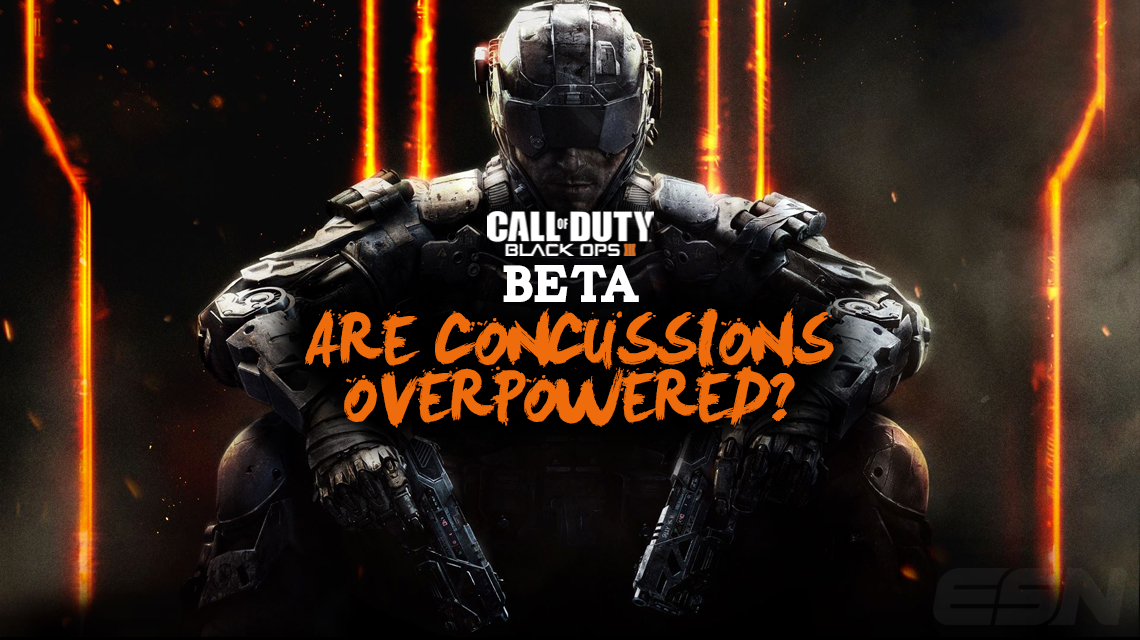 Recently, publisher Activision and developer Treyarch Studios have started the Beta for Call of Duty®: Black Ops III on the Xbox One and PC. Casual, competitive players and snipers alike have been given the opportunity to trial out the game for some time, but it seems that the Concussion grenade has given rise to an indistinguishable frustration among all.

The overall features, strength and power of these canisters of mayhem vary from title-to-title, yet have always ended up not being banned anyways. So, why have Concussions been considered so “overpowered” within the Black Ops III betas so early? One reason: they have been “buffed” (improved in overall strength).

Similar to Black Ops III’s predecessor, Call of Duty®: Black Ops II , the Concussion stuns, staggers and distorts the opposing team, while also having the ability to disable nearby equipment from the point of impact. This makes the Concussion into a prominent tactical grenade within the CoD eSports scene, allowing competitors to “tag” enemy opponents once “hitmarkered,” while disabling their lethals and tacticals within its proximity. Black Ops III’s description of the Concussion is “disorients enemies and slows movement.” Due to its success, Flashbangs rarely got their chance within the spotlight of CoD eSports.

In contrast to Black Ops II, an addition was made to Black Ops III’s version of the Concussion grenade: once discharged, the canister emits an even brighter white flash and increased slowness of movement for approximately 5-6 seconds depending on how close you are to detonation. Here’s a first-person point of view on the PlayStation 4 beta:

It feels like Treyarch combined the effects from both the Concussion grenade and Flashbang into one canister, giving the player the “best of both worlds.” This is quite confusing as to why this buff was made for the Concussion, due to the fact that Flashbangs are still included as their own tactical within Black Ops III’s beta.

Flashbangs within Black Ops III’s betas still emit a long flash of white light and ear-ringing noise once the timer has bursted. The opposing player still has movement of their body though, similar to past Call of Duty titles, and there’s still the chance (depending on how close the opposing player was to the detonation proximity) that the player has a somewhat clear enough vision to fire back towards your direction.

Popular Call of Duty YouTuber Brad “ Drift0r ” Overbey created a video back in 2013, describing the differences between Black Ops II’s two favorited tactical grenades, the Concussion grenade and the Flashbang, while stating how each tactical grenade were “kind of opposite and inverse of the other.” Within Black Ops III’s beta, it seems that Drift0r’s statement becomes invalid.

The obvious and ideal solution would be to counter the Concussion grenades through the utilization of the third-tier perk, Tactical Mask . If Tactical Mask was to be banned throughout the “Ban/Protect System” during the pre-game stages, we may then have a problem.

Trophy Systems  are another counter that are currently within the game under tactical equipment, unlocked at level 43. The current level cap within the Xbox One and PC beta restricts the ability to utilize them right now, but the level cap will increase throughout the rest of the beta.

OpTic Gaming player and two-time Call of Duty world champion, Damon “ Karma ” Barlow, presented a counter to Concussions aside from Tactical Mask or Trophy Systems; the utilization of Ruin’s specialist ability, Overdrive , which allows one to have a “cybernetic leg augmentation that enables temporary burst of speed,” as stated on Black Ops III’s Multiplayer page :

Note that this can only work within the public match system, because only one player per team can utilize Ruin’s Overdrive ability in a competitive match within Arena or a custom lobby, due to the “Specialist Draft.” Overdrive is only awarded at certain points during a match anyways, when Concussions are constantly flying throughout.

Even with these three counters, there’s still another issue that deems the Concussion even more overpowered in comparison to the similar complaints of its lethal counterpart, the Fragmentation Grenade . The Frag grenade can be countered by the first-tier perk, Flak Jacket , similar to how the Concussion grenade can be stopped by Tactical Mask. On the other hand, Flak Jacket is really the only important competitive perk within the first-tier, unlike Tactical Mask’s third-tier which also includes Blast Suppressor and Dead Silence , two vital perks within CoD eSports. Your “Perk 3 Greed” would have to be utilized, restraining other options to your “Pick 10” Create-A-Class.

We still have time to see changes to the Concussion before the official release on Nov. 6, 2015, since we’re still in the beta stages of Black Ops III. Hopefully Concussions are “nerfed” (decreased in strength) before the official release of the game. Plenty of changes will happen between now and early November, and surely more to come throughout the game’s timeline.

Concussions, also known as Stun grenades within other CoD titles, have always been utilized within the competitive scene, so don’t assume that they’ll be pre-restricted like other items have been in the past, if item pre-restrictions even coexist with the Ban/Protect System in Black Ops III.

Do you believe that Concussions will need to be nerfed when Tactical Mask is utilized? Let us know. Stay up-to-date with more Call of Duty®: Black Ops III content over at our Twitter – @eSportsNation .