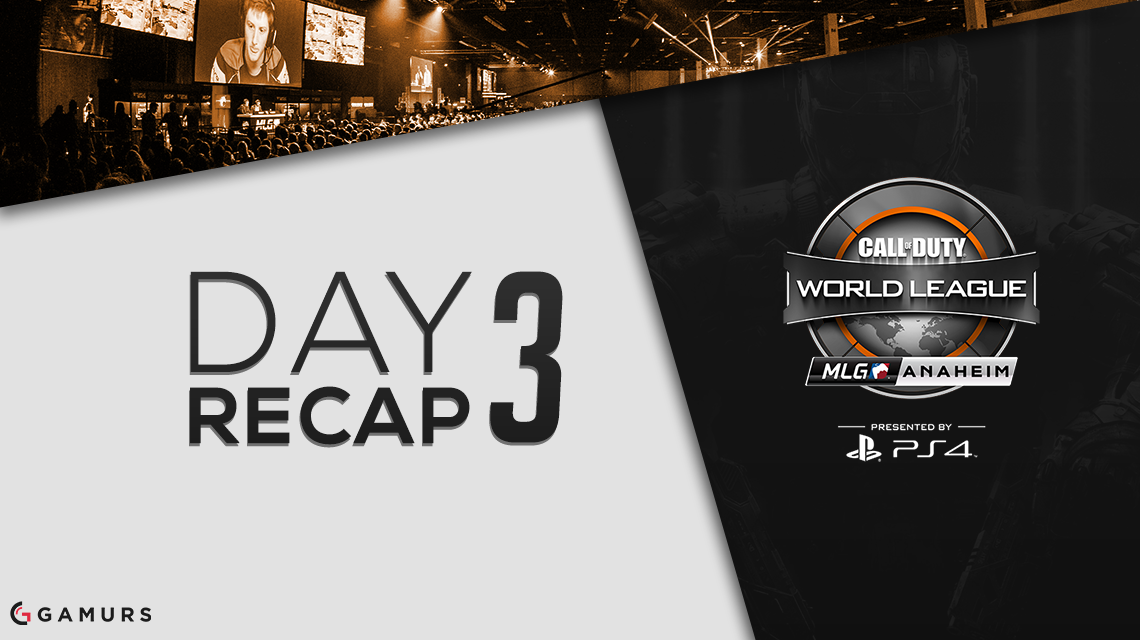 After three days of incredible competition, the 2016 MLG Anaheim Open has finished. The final and deciding day saw some great matches involving the world’s best Call of Duty teams. The results of Championship Sunday are listed below.

In LBR3, we saw some great games come from the FaZe-Splyce series, especially the Capture the Flag game on Breach, where FaZe captured a flag with three seconds to spare in overtime to force a game five. FaZe looked like they were going to take a fairly quick exit in the tournament after falling in the series 0-2, but their resilience proved to be incredible, completing the reverse sweep, and sending the Splyce guys home.

Although Team EnVyUs had played very well up to this point in the tournament, Luminosity proved to be too much, defeating and eliminating the boys in blue in four games.

Infused looked like they were poised to punch their ticket to the winner bracket finals after showing dominance in games one and two, but the always dangerous Team eLevate showed that they should never be counted out. Down 0-2 in the series, eLevate bounced back in a huge way, winning the Breach Uplink game by a score of 22-7. They then squeaked out a 4-3 victory on Fringe Capture the Flag to force a decisive game five. In the final game of the series, eLevate completed the reverse sweep on Infused and secured a place in the winner bracket finals.

After getting swept in the winners bracket semifinals by OpTic, Rise Nation was out to prove a point that they are still one of the best teams in the world and they should not be counted out. Rise responded with a sweep of their own after sneaking out a win in the Hardpoint on Breach. Rise then went on to absolutely demolish Luminosity in games two and three.

FaZe Clan: The crushers of European dreams. FaZe must be hated throughout Europe now as they managed to complete their second reverse sweep of the day, both coming against European teams.

FaZe’s incredible losers bracket run came to an end at the hands of a very determined Rise Nation team. Rise showed control in each of their three game wins, and they almost pulled off a 0-5 comeback on Hunted S&D, only to lose in round eleven. There are definitely some things to work on for FaZe but their losers bracket resilience showed that they still have what it takes to be one of the world’s top teams.

You would expect a close and contested series in the winners bracket finals, but not in this one. OpTic just ran away with the series, playing to their strengths and sweeping Team eLevate.

eLevate and Rise proved to be very evenly matched opponents. Rise started off by dominating the Hardpoint game on Stronghold but eLevate responded with a 6-5 victory on Fringe Search & Destroy. eLevate built on that momentum to take Breach Uplink 7-6, and close out the series on Evac Capture the Flag with a overtime victory by capturing flags in each OT half.

Another tournament gone and another tournament championship for OpTic Gaming. The OG boys have dominated Black Ops III thus far, winning the CWL NA Stage 1 Finals, Crown Melbourne Invitational, ESWC, and now MLG Anaheim. Throughout this tournament, OpTic kept reminding everyone that they are the best. They blew through their group, winning all three of their matches while only dropping one map in ten possible maps in total.

Once past group play, they continued to demolish the opposition in bracket play, winning their next three series while again only losing one map in total of the series. In the grand finals, they lost the first two maps, tying the total amount that they had lost in their first six series in Anaheim this weekend. But it’s OpTic; they are not normal. They stormed back, taking the next three maps to secure the reverse sweep and the MLG Anaheim Open championship. Congratulations once again to OpTic Gaming on yet another MLG title.