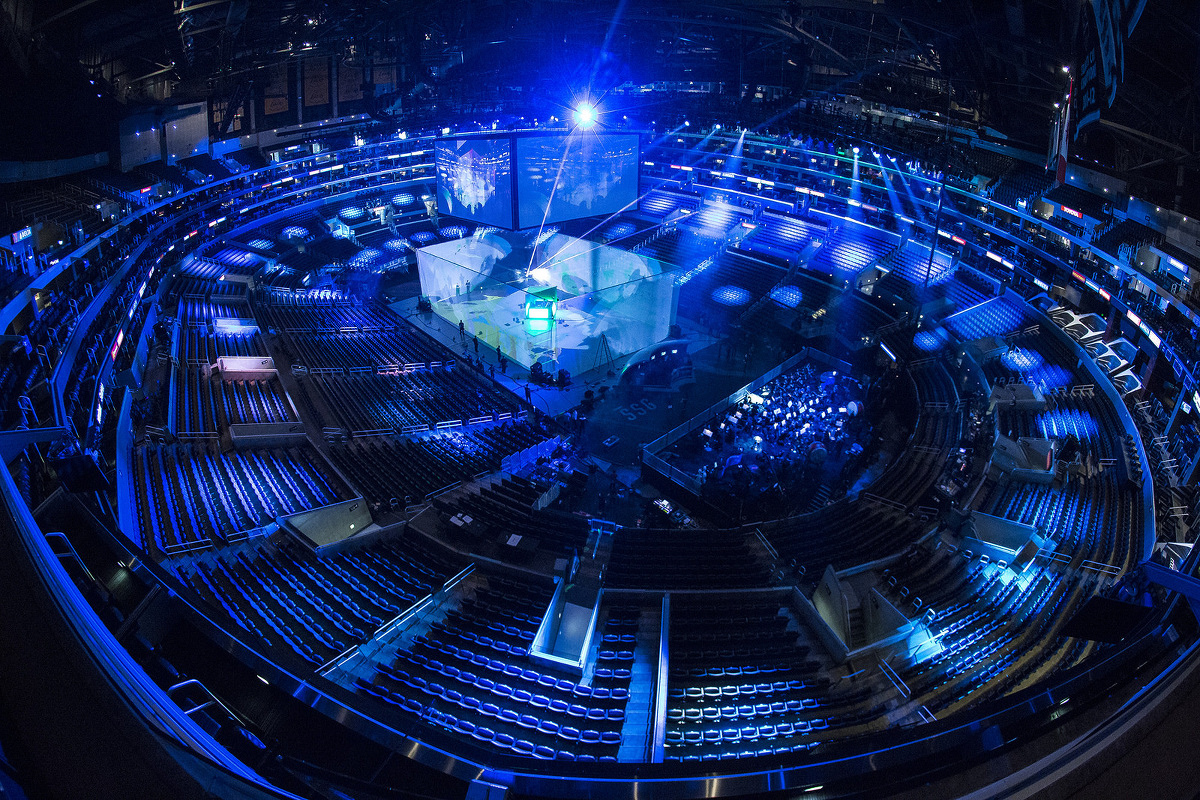 A story on the most important esports business moves of the year can always begin the same way: This was the biggest year yet. The industry’s growth is irrepressible and unstoppable. It is so predictable that, as we look back at the year that was in esports, it’s less interesting to marvel at the sheer scale of the deals made than it is to describe their theme.

What is the story that the biggest business deals in esports tells us? In 2016, it was the sudden and explosive moves made by traditional sports groups.

You can actually see the foundations for 2016 from our list last year. In 2015, the early rumblings of mainstream investment and interest in esports began to shake the industry. A Swedish television giant bought majority stakes in DreamHack and ESL. Turner announced its groundbreaking ELEAGUE competition. This year, the clip of mainstream investment increased dramatically, especially from traditional sports groups. It began early in the year, when German sporting giant FC Schalke 04 bought into the LCS, becoming the first major sports organization to field a League of Legends team.

That was just the start, of course. Here are the biggest business moves from another wild year in esports.

The growth of ELEAGUE and Turner in esports

Last year, we included Turner Sports on this list merely for signalling its intention to run ELEAGUE, and for their initial preview broadcast. For 2016 Turner, has shown itself more than worthy of a place on this list not by reputation, but by its impact.

The growth of the ELEAGUE brand is now a blueprint that all mainstream media entities should follow. Throughout its Counter-Strike broadcasts and in its foray into Overwatch, Turner deftly dove-tailed decades of television broadcasting experience with all the things that made esports broadcasting work in the first place.

Turner allowed its broadcasters, particularly host Richard Lewis and pundit Duncan “Thorin” Shields, to retain their popular voice. They weren’t reigned in. They were allowed to be just as cutthroat and occasionally acerbic as fans have come to know and love. Turner also didn’t change much about the presentation of the games themselves.

It’s fair to say that ELEAGUE has, in one year, established itself among the most popular brands in Counter-Strike tournaments. Next month Turner will host a Valve Major, further solidifying its ties to the community.

In 2016 the Philadelphia 76ers became the latest mainstream sports investors in an esports franchise, purchasing one of the oldest teams out there.

In one of the biggest complete sale deals ever seen in esports, Michael “ODEE” O’Dell sold Team Dignitas, which was founded in 2003 by September, the NBA franchise. This wasn’t like other teams who attracted investors that also happen to own sports teams: Dignitas, along with Team Apex, was bought in its entirety by the 76ers.

Following the successful pattern of other investors into the space however, the 76ers did not try to reinvent what had worked for Dignitas for well over a decade. The Dignitas branding was retained, with the Team Apex League of Legends team re-branded. To fans and other outside observers, nothing has really changed about the team. The new organization combines the experience of both Apex and Dignitas, adding games industry veteran Greg Richardson as chairman, and simply allows Dignitas access to greater resources, funding and potential audience. Dignitas advertising boards now sit courtside at the Wells Fargo Center, for example.

All of this ensures that the Dignitas brand will continue to be a major player in the space for years to come, and with the backing of some experienced and powerful figures from the sports world.

The investment group is perhaps the largest collection of sports investors ever to buy into esports. It includes NBA Hall of Famer Magic Johnson, AOL co-founder Steve Case and Mandalay Sports Media CEO Dick Glover. More than three dozen investors have bought into Team Liquid, including ownership groups of more than half a dozen sports franchises.

Original team founder Victor “Nazgul” Goossens and Steve “LiQuiD112” Arhancet—who came over as part of the merger with Team Curse—have stayed on as co-CEOs of the company. As esports continues to expand as a competitive field and a media property, the pair will be able to call on unparalleled experience to navigate the growing landscape.

Around-the-clock esports TV channels became something of a thing this year. ESL boasted about the launch of the “world’s first 24/7 esports TV channel” as early as April. But GINX TV stole the show a few months later. The UK-based company secured a £3.1 million cash injection from media networks Sky and ITV in return for 33 percent stake. With money in its pockets, GINX now produces a much-anticipated daily show called “The Bridge.”

With Alex “Machine” Richardson, OJ Borg, and Marcella “Nysira” de Bie as hosts and famous guests like Duncan “Thorin” Shields, Jorien “Sheever” van der Heijden, and Owen “ODPixel” Davies the show doesn’t leave much to be desired. With only three episodes in the books, however, it’s too early to call it a success. The format of the show, however, is innovative, entertaining and insightful, a mixture that’s a solid foundation for success at the very least.

More important, however, is the commitment of Sky and ITV. Both are prominent and influential media networks with their eyes on the esports industry. Sky, for example, has aired some events and produced features about esports. Nothing as big as the investment into GINX TV, though. Both ITV and Sky have the option to acquire further holdings in GINX. If either party does not take up its option, the remaining party may have the option to acquire 100 percent.

In other words: GINX TV could very well be taken over completely by one of the biggest media networks in the world soon.

The news broke on New Year’s Eve: MLG as we know it is over. In an unparalleled acquisition, Activision Blizzard bought substantially all assets from MLG, the company that was once North America’s largest esports company. The company paid another $46 million to further Activision Blizzard’s “plans to create the ESPN of esports,” as CEO Bobby Kotick called it.

The purchase not only added live streaming technologies and production capabilities to the Activision Blizzard Media Networks division but also veteran personnel like MLG co-founders Mike Sepso and Sundance DiGiovanni.

Reportedly, MLG were on the edge of bankruptcy. Last year, sales talks with Yahoo apparently failed. The company had also filed for multiple debt financing rounds, more than $18 million in total. Activision Blizzard, on the other side, invested “less than ten percent of their marketing budget,” to acquire substantially MLG’s assets, what—according to Wedbush Securities analyst Michael Pacter—seemed like “a reasonable purchase.”

One year later, Activision Blizzard is far away from its set goal to become the ESPN of esports. And that’s not just because ESPN got involved later the year themselves. Aside from personnel changes—former FOX Sports executive Vlastelica became CEO of ActiBlizz Esports/MLG—not much was heard from the venture since then. If Activision Blizzard’s “strategic position in competitive gaming” has really strengthened through the acquisition still remains to be seen.

Schalke in the LCS

FC Schalke 04, which is one of the oldest, most popular, and most valuable sports clubs in the world, was the first traditional sports team to jump head first into esports. While other clubs put FIFA players in their jerseys and called it esports commitment, Schalke acquired the EU LCS slot of Elements and fielded a roster for the 2016 Summer Split. With many resources available, including Schalke’s training facilities and professional staff, the expectations for the team were high.

Schalke finished the season with a disappointing ratio of three wins, nine draws, and six losses, however, ending up 8th and finding themselves in the 2017 EU LCS Spring Promotion tournament. Schalke lost both matches and was relegated to the Challenger Series. And while many expected that Schalke would simply sell its slot and end its esports engagement, the club remained committed. It’s held tryouts in the form of scouting days and is keen to make its way back to the European LCS with a new team.

Schalke set an example. Worldwide, more than 40 sports clubs are now tied with esports in one way or the other.

Broadcasting rights was the topic on everyone’s lips in 2016. It’s the most potent form of monetization in esports and, at the same time, the most under-established in esports. It was only a matter of time before someone made the first step. And it isn’t really surprising that it was League of Legends developer Riot Games which, in partnering up with MLB Advanced Media, went ahead of the game.

Riot and “the Biggest Media Company You’ve Never Heard Of,” as Forbes called MLBAM two years ago, went into an agreement that secured the former a minimum of $50 million per year plus split advertising revenue and the latter the exclusive rights to monetize and commercialize League esports. The deal runs through 2023, a very long time span in the fast-paced world of esports.

MLBAM, via its spin-off BAMtech, is expected to offer some kind of premium content, while Riot Games’ Jared Kennedy, co-head of esports, ensured that the “core esports experience remains as accessible as possible and free without paywall,” as he told Yahoo Esports in an interview. It is also important to note that the economic value of the deal is not anticipated to start hitting material until 2018, as Kennedy explained. Meaning that, at least over the course of next year, fans will be able to watch League esports as is usual.

Even with this $300 million and more deal, esports is nowhere near traditional sports when it comes to the volume of broadcasting rights. It is, however, a start and a significant one at that.

Not all big business developments this year had a positive spin for esports. Over the summer, a massive part of the infrastructure of Counter-Strike: Global Offensive came crashing down.

Online gambling with in-game currency had long been a legal grey area, but betting with Counter-Strike skins had become incredibly popular—and lucrative. There were dozens of sites at the time, many of which sponsored teams, players, streamers and tournaments.

What started as a dispute between one streamer, Mohamad “m0E” Assad, and his sponsor CSGO Diamonds exposed a number of unsavory aspects of these sponsorship arrangements. M0E, like many others, was often playing with “house money” when advertising the sites on his stream. This meant he could bet big and never be at risk of losing his own money—but this was never disclosed to viewers.

The scandal really exploded when Trevor “TmarTn” Martin and Thomas “ProSyndicate” Cassell were revealed to not only have bet with house money on the site CSGO Lotto, but that they actually owned the site and had not disclosed it. James “PhantomL0rd” Varga had a similar relationship with the site CSGO Shuffle.

Valve eventually intervened, sending out cease and desist letters to skin gambling sites, doubled down on banning gambling sites from its broadcasts. This effectively killed the industry.

Thiemo Bräutigam contributed to this story.