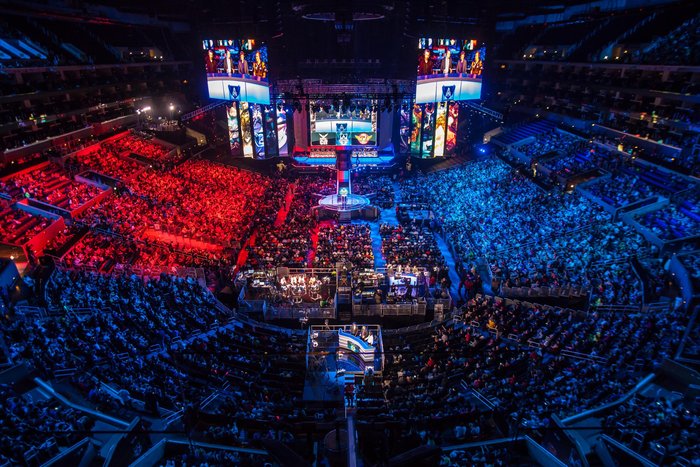 Growing up as a competitive swimmer, I always dreamed of going to the Olympics. Competing for a gold medal is the pinnacle of amateur sports around the world—a tremendous honor. But what if your sport developed completely differently than traditional sports?

“It’s misguided or egotistical of mainstream culture,” the CEO of esports betting company Unikrn told Reuters last year, “to think the Olympics are somehow a greater honor than The International, Worlds, of a CS:GO Major.”

Esports is a whole different ballgame.

There has never been a mainstream “sport” that has deviated so far from the well-trodden path leading from amateurism to professionalism in so many ways as esports. This divergence from the traditional way of doing things has resulted in the top-down development of the industry, which is totally different from how stick-and-ball sports formed. And that’s, in turn, left traditionally highly-involved organizations like the National Collegiate Athletic Association (NCAA) and the International Olympic Committee struggling to decide how to regulate play, if at all.

Without a precedent to follow, esports has thus far failed to adopt universal standards governing everything from competition rules to player rights to penalties for organizations who fail to pay their stars. As a “sport” that is claimed to be “watched by more people than the Super Bowl” and will be mainstream sooner rather than later, regulation is necessary for driving the industry forward in a sustainable way.

Sports vs. esports: The early stages

Esports hasn’t just wandered off course a bit. It has developed rapidly in the opposite direction. There are some key factors that have contributed to this. Esports fundamentally requires a certain level of technological development. Until the late 1990s, widespread broadband internet service was unavailable to the public. Then, the South Korean government undertook an economic revival project that introduced this advanced infrastructure to the country, which made online, multiplayer gaming viable and reliable. Other countries followed soon after, and the technology was finally in a place to allow competitive gaming to take off. That was the genesis of esports in the way we know it now.

Another factor is the history of negatively around gaming and the perceived sedentary lifestyle it allegedly causes from parents and other authority figures. Playing games has long been considered a waste of time for young people, which has meant that the time requirement needed to be a top player could only be achieved at a later age when parental oversight diminished and independence increased.

The histories of the major sports, specifically in the US, all follow a very similar development pattern. After conceptualization, baseball, basketball, and football (the American variety) all organized in universities or among amateurs first with high school teams either developing concurrently or following closely behind. From there, these sports were embraced by youngsters, who then fed the amateur, high school, and university teams with well-trained athletes. By the time these athletes enrolled in a university, they’d accumulated many years of experience within organized teams.

Eventually, professional leagues developed, and the top players from the amateur ranks could make a living playing their sport. Whichever slightly varied order of development these major traditional sports followed, professional play always came after the youth, high school, and university foundations and infrastructures had been laid. Now that esports has put the pedal to the floor, in reverse, and made its way into the education pipeline, having a way to regulate it is critical to its ability to thrive within the scholastic framework.

Whoa, this is heavy

Figuring out ways to make sure that there are fair play and regulatory oversight at all levels of competition is a daunting task for any sport, but there are challenges unique to esports as a scholastic activity. Even the organization that wants total control over everything at the university level decided to pass up the chance to take control.

In 2017, the NCAA hired an outside firm to research esports to see if the collegiate governing body would create a framework for it. A “yes” verdict would’ve given competitive gaming some much-needed structure and support. A “no” answer would mean that third parties could get involved in tournament organization and set their own rules. In early 2019, the NCAA officially announced it wouldn’t be overseeing esports, opening the door for organizations such as TESPA, was founded at the University of Texas but is now headquartered at the Blizzard Entertainment offices in California. The National Association of Collegiate Esports (NACE) has also thrown its hat in the ring to become the leader in university esports regulation.

So, the question is, who can actually do the job when it comes to such an important undertaking? With events like the Esports Regulatory Congress (Sept. 23 to 24 in Barcelona) bringing together decision-makers from all esports spheres to discuss education, scholarships, and certification, efforts are being made to bring oversight to an industry many still call the “Wild West.” While the professional scene is becoming more business-like and oversight is being recognized as a necessary part of the infrastructure, many unaffiliated universities in the US are currently being left to their own devices when it comes to their esports athletes.

Even with the desire to structure events, create rules, and all the other things that go along with being the governing body, these organizations are always at risk of being made totally redundant at any time. That’s because esports, unlike any traditional sport, has an intellectual property owner. The publishers hold all the cards. If Valve or Riot Games wanted to be the exclusive rights holder for events, they could. In fact, Riot already has already taken a step in that direction.

While, for now, the League of Legends maker is allowing schools to play the game while a member of another organization, it will not allow any other to make rules for League competitions.

With the path that esports has taken being so radically different from traditional sports, it’s no surprise that governing bodies have been hesitant to jump in and take the initiative. When the Esports Regulatory Congress event is held later this month, new ideas about building esports into the plans of educational institutions at all levels will be on the agenda.

If the minds that come together there in Barcelona can figure out the best course of action for the implementation of gaming into school curriculums around the world, the inverse development of esports may actually prove to be a good thing.