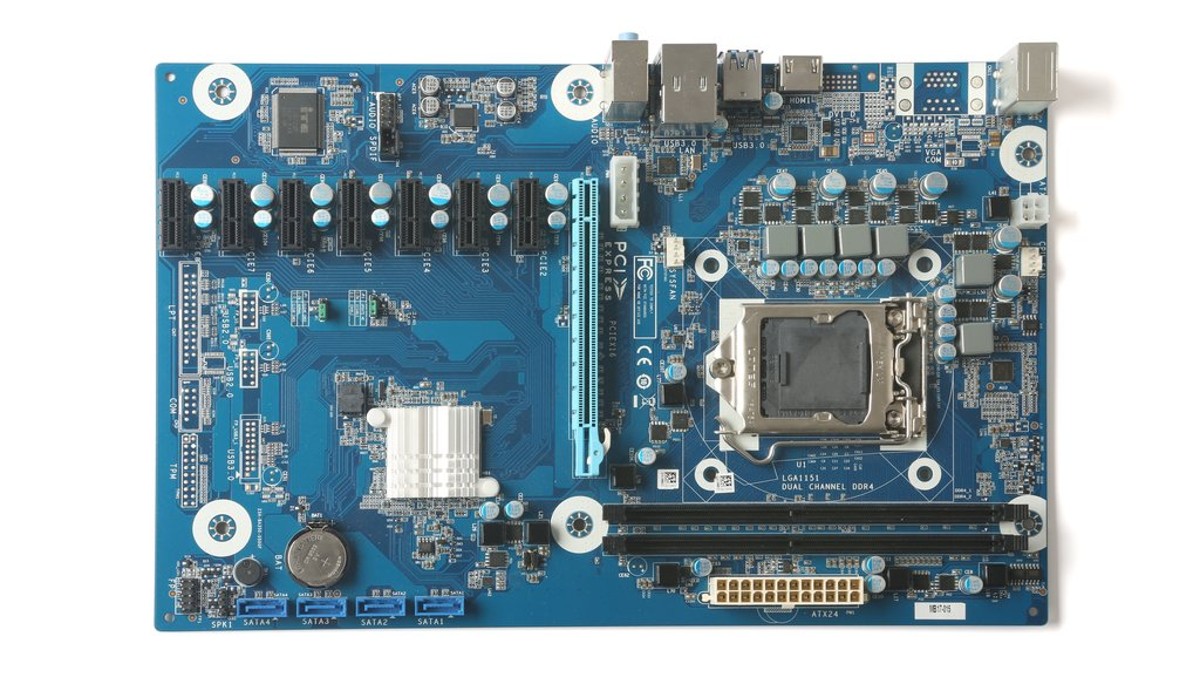 Motherboards for crypto mining are slightly different from regular versions and have multiple PCIe slots for GPUs. The more PCIe slots the motherboard has, the more mining it can do and therefore generate the most income. Some of the best crypto mining motherboards can handle over 10 GPUs for buyers to get the best return on their income

One of the main factors to consider when buying a crypto mining motherboard is compatibility. The motherboard is the foundation rig and should be compatible with the CPUs and GPUs you plan to use. Motherboards work with most GPUs, but it’s worth checking which compatible CPUs are available and their pricing before dropping cash on the motherboard.

Another factor to consider is the power supply. Crypto mining is heavy on electricity usage, and many motherboards require multiple PSUs to handle all the graphics cards in the system. Some motherboards support multiple PSUs, so there offer some flexibility, but others only allow for one, which means it should have a high output to deal with the load.

The Asus B250 Mining Expert is the current king of mining motherboards because it has the highest GPU capacity. Its 19 PCIe slots surpass its rivals and ensure maximum cost-effectiveness because it can do the job of multiple motherboards with a smaller capacity. Running 19 GPUs uses lots of power, so the B250 Mining Expert accommodates three power supply units to handle different motherboard areas. Two PSUs power six PCIe slots each, with the third one handling the last seven slots.

This B250 motherboard uses Intel’s LGA 1151 socket and works with the company’s sixth and seventh-generation processors. It supports up to two DDR4 RAM chips with a maximum capacity of 32 GB each.

There’s no doubt that the B250 Mining Expert’s performance, but its massive $1098.00 price tag and limited availability might deter many buyers. It’s still worth it for miners with deep pockets looking to build the best rig possible.

If the B250 Mining Expert is too expensive or unavailable, MSI’s B360-F PRO is the next best option. The 18 PCIe slots come close to the Asus offering, and it’s also compatible with the newer Intel processors. Where the B360-F PRO surpasses the B250 Mining Expert is its ability to run up to five PSUs through a provided adapter. MSI also added visual elements like individual LEDs for each PCIe slot, and a Debug LED to troubleshoot any issues quickly.

Instead of working with the older sixth and seventh-generation Intel CPUs, the B360-F PRO works with the newer eighth and ninth-generation versions with more processing power. It has the same dual RAM slots as the B250 Mining Expert and also supports up to 32 GB sticks in each slot.

At $996.86, the B360-F PRO is slightly less expensive than the B250 Mining Expert and has fewer PCIe slots. It’s still a practical alternative because it takes newer CPUs and has a higher power supply capability.

Biostar’s TB360-BTC Expert is one of the best crypto mining motherboards, thanks to its 17 PCI-E 3.0 slots and affordable price tag. This motherboard is compatible with most graphics cards and can work with a mix of Nvidia and AMD options. Compared to the other motherboards mentioned so far, the TB360-BTC Expert only supports up to two PSUs.

The TB360-BTC Expert might use a more modern Intel H370 chipset compared to the B360-F PRO, but it uses the same LGA 1151 socket and eighth and ninth-generation processors. Like the other motherboards mentioned so far, it accommodates up to two 32 GB RAM sticks.

Considering the TB360-BTC Experts 17 GPU slots, it offers outstanding value at $299.95 because its capacity is marginally lower than the two top picks at around a third of the price. It’s one of the best crypto mining motherboards for buyers getting started who don’t want a huge cash outlay.

Buyers looking to replace a damaged motherboard might be interested in the Zotac B150 Mining ATX. While the seven GPU capacity doesn’t come close to the top picks it’s still adequate for mining, especially considering its low cost factor.

Zotac’s B150 isn’t the most modern motherboard and its Intel LGA 1151 socket supports older sixth and seventh-generation processors. Despite using older CPUs, the B150 matches the RAM capacity of the other motherboards listed here at 64 GB.

The B150 might not be the best for new rigs because it uses older processors and doesn’t have many PCIe slots. It’s great for replacing old motherboards because of its older tech and affordable $349.99 price tag.

Budget-conscious buyers or those looking to get into crypto mining can check out Biostar’s TZ590-BTC Duo. As a more affordable crypto mining motherboard, it only has eight PCIe slots, but somewhat makes up for it by supporting newer processors and a higher RAM capacity than any other motherboard on this list.

The TZ590-BTC Duo also has an Intel LGA 1200 socket and takes the more modern tenth and eleventh generation processors. There are also four RAM slots and it can support up to 128 GB of DDR 4 RAM.

For an entry-level crypto mining motherboard, the TZ590-BTC Duo has a high RAM capacity and supports newer CPUs. Its limited PCIe slots are forgivable considering its $221.53 price tag.