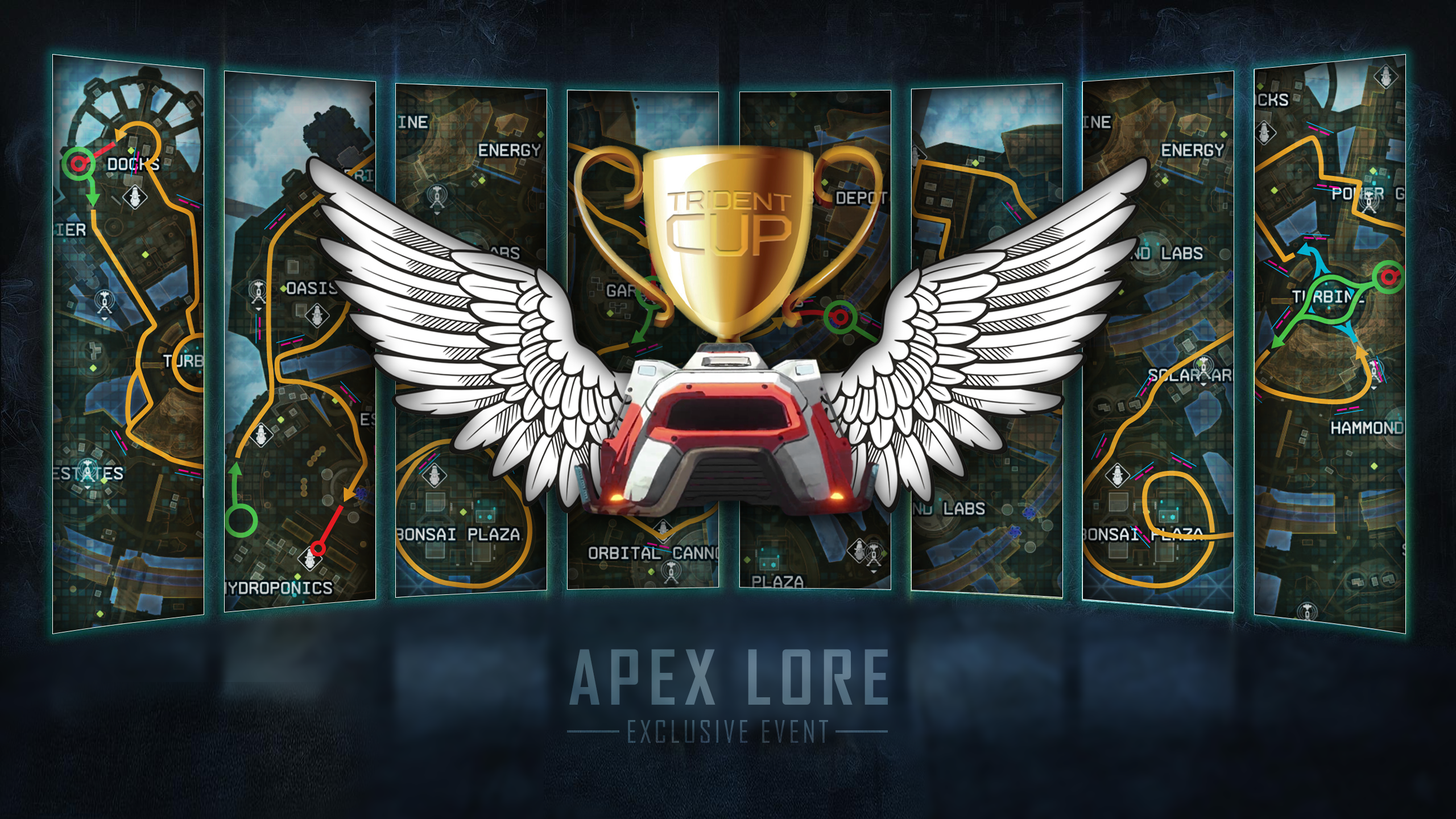 The Olympian landscape boasted a new spectacle during the first week of Apex Legends’ seventh season. Nearly a dozen Tridents flocked to areas of the map, like the lavish Autumn Estates or the scenic Golden Gardens, and waited all in order as if they were posing for a picture or setting up a starting grid.

In one fell swoop, the vehicles darted brusquely across the map prompted by a starting shot. The pilots were close on each other’s heels—sometimes close enough to crash into each other—as they hovered through a path made by Wattson fences that guided players through Ivory Pass and Wildflower Meadow.

The commotion wasn’t just an ordinary group of legends trying to bring Grand Theft Auto into Apex. It was the Trident Cup, a full-fledged, fan-made racing mini-game complete with four referees, 11 circuits, 30 unique pilots, and close to 100 races—all done with resources available to any Apex player.

Mathew “Spear” Morales and Karl “Sparkz” Abrahamsson, two moderators in the r/ApexLore Discord server, were the masterminds behind the Trident Cup. The duo wanted to push the boundaries of the Olympus Preview limited-time mode and create a distinguishing experience for both server members and the Apex community as a whole.

Designing the Trident Cup was a “dual effort,” the two told Dot Esports. Each of them devoted “probably 10 to 12 hours” to drawing tracks, developing rules, or capturing and editing footage—and that’s not counting the time spent actually racing.

The result was a series of friendly races featuring the special kind of chaos that belongs in Apex with Crypto EMPs, stray jump pads, a barrage of gravity lifts, and, of course, the adrenaline rush from driving through the closing ring. The pits in Olympus also claimed their fair share of Tridents.

Planning began before players even jumped out of the dropship. Each pilot (or team of pilots) dashed to their assigned Trident in Olympus while Sparkz waited for the ring to emerge. Once the pattern was clear, he picked out a circuit and the racers flocked to the starting line.

While participants were en route to the destination, referees (like myself) placed Wattson fences on specific sections of the map. The gadgets served to signal the way, leading racers across the Carrier or blocking out a section of the maze-like hallways in Turbine.

Sparkz concocted a total of 11 different circuits that encompassed most of Olympus, from Oasis to Orbital Cannon. Each track suited the four-minute ring in the first round but could be trimmed down for the later stages of the match with a lot of planning and a little improvising.

The final rendition of the tracks came a long way from the prototypes in the test run. Sparkz spent “probably 10 to 12 hours” designing and refining the circuits, as well as making it easier for both participants and referees alike to understand the course—including a color-coded guide to each Wattson fence placement and which referee would set it down on each spot. Poring over the details of Olympus also taught him a considerable amount about the arena’s map design, a process that he relished as an aspiring game designer.

Spear, on the other hand, worked on the “front-end” of the event, moderating the server and capturing, editing, and publishing footage on social media. Through the suggestion of a friend, he employed Crypto’s drone as a camera—“drones are used to advertise and broadcast the Games” in the in-game universe, he said.

The gadget worked perfectly. Crypto’s drone can move freely and achieve angles that would be nearly impossible with any other legend. And its wide field-of-view provides “the sense of an actual cinematic view within the Games”—perfect for the highlight reel.

The Trident Cup was a server-exclusive event by design, but its strict scope was mainly due to time constraints. Olympus Preview’s one-week stint in the map rotation meant that the duo had to assemble something quickly or miss their window of opportunity for good. “It’s not like a crazy idea, a lot of people have thought about the races,” Spear said. “It was a matter of who would do it first and who would actually pull it off.”

The reception showed that the tournament rippled across the wider Apex community. Footage from the Trident Cup gained significant traction on social media, both from the community and Respawn staff. In addition to praise from nearly a dozen developers and thousands of players, Sparkz and Spear’s efforts earned them a shoutout on the official Apex Twitter account.

The overwhelming support was one of the biggest triumphs of the event, according to the two. Players were captivated by the high-octane action (one unrelated lobby member even shared their amazement in chat, Sparkz said) and developers saw the Apex fan base pushing the boundaries of their creations. The joint sanction from both Respawn staff and large parts of the fan base is an incentive for other players to design and enact their own creations.

The Trident Cup could make its rounds to the rest of the community with another set of fan-made recreations inspired by the premade tracks. “We wanted people to be able to recreate [the Trident Cup],” Spear said. At its core, all it takes to get started is a vehicle for each pilot or team, several Wattson fences, and a course—but it helps to have an exploration limited-time mode.

Olympus Preview played a huge part in the event. Without it, hosting an organized circuit would be nearly impossible. A flock of Tridents and lone Wattsons setting down seemingly-random fences are prime targets for enemy squads. Racers could brave frantic firefights and third-parties to host the Trident Cup in a normal public match—“the Mad Max mode,” as the two called it—but it would make for a vastly different, more frustrating experience.

Spear and Sparkz are still planning more events for the future, but they would have to adapt the formulas to account for enemy squads. The duo would build upon the Trident Cup if Olympus Preview made a comeback or, more ideally, in a custom server.

“I would truly approach it as if I was a game developer if given a custom server to do this on, making millions of variations, balancing the races, and balancing tracks,” Sparkz said.

In the meantime, though, they’re going to take a breather to pop a Phoenix Kit and get a second wind to host the next event in the future.

Disclaimer: Pedro Peres is a member of the Apex Lore server and participated in the Trident Cup as a referee.