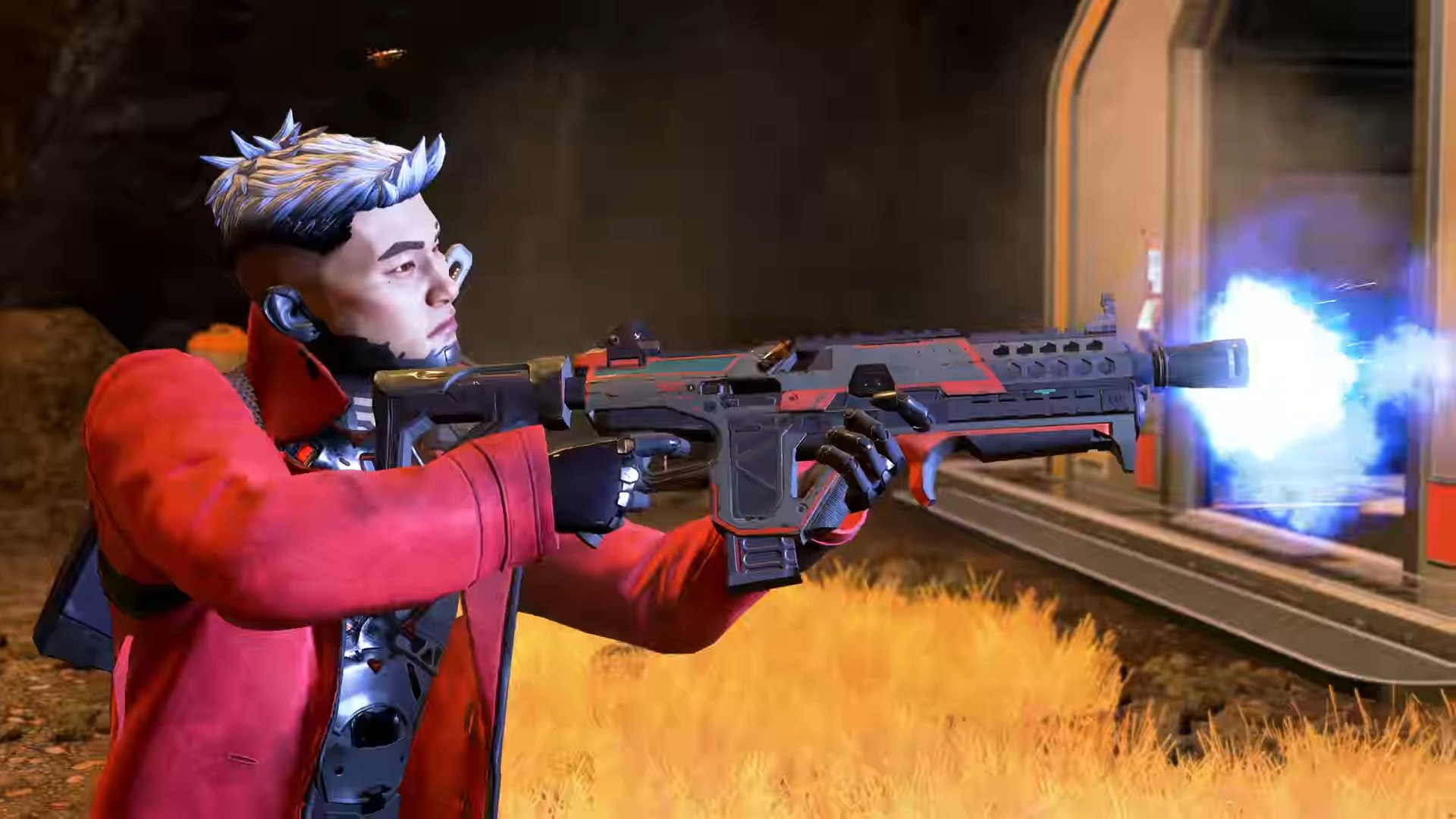 Casual viewers of the Apex Legends esports scene might have been surprised when NEW Esports seemingly came out of nowhere to win the ALGS EMEA Split One Playoffs, taking home a cool $100,000 for their efforts. The team finished 16th in the Pro League, just barely making the cut to get into the Playoffs lobby.

But fans who follow the Portuguese powerhouse know they’ve made a habit of performing well under pressure. Since the beginning of the game’s competitive scene in 2019, the core team members of NEW, Francisco “k4shera” Alves and Rafael “PostKiLL” Jesus, have been on the grind. They were at the X Games in Minneapolis as members of Lazarus. They went to 2019’s legendary Preseason Invitational in Poland, the last time the Apex scene competed in LAN.

After the gig with Lazarus ended, NEW played a lot of Apex, earning a little prize money here and there. Finally, they went on a hot streak in late 2020 and early 2021 with a string of top finishes in Match Point tournaments. But they’d never notched a Match Point win until last week’s Split One Playoffs. Despite finishing with only 77 points, almost 40 points behind lobby leader Alliance, NEW were the only team to win more than one game in the 10-game series. They clutched up when it mattered most to vault over fan favorites like Gambit and Alliance.

They’ve collectively put in years of hard work in the Apex scene, and their Playoffs win was the biggest one yet for the team. After struggling for years to find a consistent third player, NEW’s core duo of k4shera and PostKiLL clicked with Ameer “VJEIX” Hassan. VJEIX stepped up in a big way for the win. Unable to compete for the ALGS in his native country of Iraq, he moved to Turkey to live with his brother so he could compete in the Pro League.

Dot Esports spoke with K4shera on a video call last week to debrief about the win and how it feels to be rewarded after a long grind in the trenches.

This was a huge win for you—you’ve been in the Apex scene for a pretty long time, right?

K4shera: Me and PostKiLL have been playing since the beginning of the game. So it has been a long time for us to come and actually make a statement like this one.

The team really clutched up in the last few games. Tell me about how you were feeling through the first three or four games. You were a little bit behind the top of the pack. And then the last three games, you won two out of three, right?

Yeah, we won two games. And the one that we didn’t win, we should have at least made like top three. We did a huge misplay. And yeah, the first few games were kind of heartbreaking for us. We were feeling really confident coming into this final. We prepared so many things. When the first losses showed up, it was mainly individual mistakes and mistakes that weren’t happening in scrims for us. It was like, “okay, this is not happening like we prepared. Maybe this is not our day.”

I even thought about it in the middle of the tournament—it’s just not our day. But we kept like every single game to approach it differently, and try to find ourselves in the tournament and our chemistry. And the more we played, I felt the more confident we were playing. And when that win showed up, we felt like this was a tournament that we are going to win because there were so many moments in that 15-kill game that we could have died, we could have lost. But there was like always someone showing up. Always someone like clutching up for the team that like, like, how can I put it?

Yeah, it was meant to be. Like, we actually felt that.

I wanted to ask how it feels to play without a Gibby these days, and how Crypto-Caustic comps are on the rise.

We have been playing this comp for more than a year now. And like, we are one of the most dominant in in the comp. But yeah, it’s completely different. There are a lot of games and a lot of zones that we know that we cannot win. Only in the best case scenario, with a lot of luck and a lot of teams not even looking at us. It’s definitely tough. But when the zones and when the games are towards us and towards positions that we know that Caustic is strong? Like there’s no way you’re going to take away our win, you know?

So you’ve had a lot of different third players and I’ve heard that VJEIX, this new third player that you have, is a really recent pickup. Can you tell me about that?

Yeah, for sure. Me and PostKiLL are always in a bit of a rough patch. Like PostKiLL having to drop Apex because of family issues, or just things not working out with different teams. And since the last time that me and Post got together, it was definitely a struggle trying to find a third player that was actually a good fit for us. We were never having that third player, like experienced, tier-one, third player. It was always players that no one recognized any value whatsoever.

I think we already proved ourselves a lot that we are at this level, because we deserve it after all the third players that we’ve been through, after all the rough patches, we’re able to be consistent and outperform the best organizations in EU. Teams that have been together for one year, two years. So that just shows me that the formula that me and Post created was the right one. We just needed to find the person that fits that formula and that way of approaching the game. And I feel like we actually found that player, even though like VJEIX was a player that that has almost no experience in competitive because he lived in a country that is not eligible for ALGS and he actually switched countries and went to live with his brother in Turkey so he was able to compete.

We knew that VJEIX was insane because he already played in official tournaments and he’d already proved himself as an individual mechanical player. Let’s see how it goes. And I don’t know, he just fit. Everything that we said to him, every single scream or whatever, he just tries to improve every single game and he listens to us. VJEIX was a key piece in our team to actually win this tournament.

We should talk about Match Point format. I feel like a lot of people brought up the scoreboard. You guys got 77 points, and a few teams got more points than you.

I actually have two things to say on that. First thing is that Match Point system, maybe it’s not the best for a player, because maybe that doesn’t translate into who the best team was. But it’s only for the winners. Every other team is judged based on their points.

And the other thing is that, for example, in this Match Point, there were ten games. Seven out of those ten games were zones catering to the same teams. I’m not saying that those teams are not strong or they didn’t deserve to win. But for example, both iG and Gambit had priority in every single one of those seven zones. They could choose the best spot and that is actually huge in a playoff. They deserved it—they deserve those points. But if Match Point is not the best, having seven zones to the same size is not the best as well. Like maybe if the zones are all distributed evenly. Maybe then we can talk more about Match Point.

The other thing is, we already lost two big tournaments because of Match Points where we had the most points and we didn’t win. And I didn’t see anyone complaining. Match Point is nothing new. Maybe they felt like an undeserving team won. But that’s not how I see it. Maybe we have less points than the top three. But we worked so hard. It took so much work from us. And from a viewer perspective, Match Point is hype. Every single Match Point in Poland. NA’s Match Point, other regions. It is how it is. You have to close games, and that’s what you need to focus on.

You proved a lot of people wrong in the scene with this win, right?

Yeah, for sure. But like, it wasn’t a one time thing. The past two playoffs we did second place [2020’s Autumn Circuit Playoffs] and top four [2021’s Winter Circuit Playoffs]. And in the ALGS Championship, we were top seeded in the group stage. So like, we already showed that we are capable. But people still discard us. People still trash talk us and the way we play. Like we never talk about other teams, or what others are doing. And I feel like we were a constant team to target. Maybe because of all our instability, or because we don’t get along that much with the other pro players. I don’t know.

You got a big check from winning the Playoffs. Are you going to do anything special with the prize money?

I still don’t know. I don’t think I’m gonna do anything too crazy. Most of it, I’m just gonna save. Maybe down the line I’ll decide what I want to do. But for now, I feel like I just want to win another one.

You’ve qualified for the ALGS Championships now. Are you excited?

Oh, for sure. It’s our final goal. We always talk about this. Like, this was just a step towards it, you know? Yeah. It’s not because we just won a Playoff. This is just the beginning. For us, it’s so huge. It’s the first real step towards having that stability that we were looking for, that we were looking for for so long, that maybe now, we have the chance to create a TSM type of legacy.